The earliest known mention of the city was in the Amarna correspondence of 1350–1330 BCE during its habitation by the Canaanites. The Hebrew Bible, which says that the city of Bethlehem was built up as a fortified city by Rehoboam, identifies it as the city David was from and where he was crowned as the king of Israel. The New Testament identifies Bethlehem as the birthplace of Jesus. Bethlehem was destroyed by the Emperor Hadrian during the second-century Bar Kokhba revolt; its rebuilding was promoted by Empress Helena, mother of Constantine the Great, who commissioned the building of its great Church of the Nativity in 327 CE. The church was badly damaged by the Samaritans, who sacked it during a revolt in 529, but was rebuilt a century later by Emperor Justinian I.

Bethlehem became part of Jund Filastin following the Muslim conquest in 637. Muslim rule continued in Bethlehem until its conquest in 1099 by a crusading army, who replaced the town’s Greek Orthodox clergy with a Latin one. In the mid-13th century, the Mamluksdemolished the city’s walls, which were subsequently rebuilt under the Ottomans in the early 16th century. Control of Bethlehem passed from the Ottomans to the British at the end of World War I. Bethlehem came under Jordanian rule during the 1948 Arab-Israeli War and was later captured by Israel in the 1967 Six-Day War. Since the 1995 Oslo Accords, Bethlehem has been administered by the Palestinian Authority. 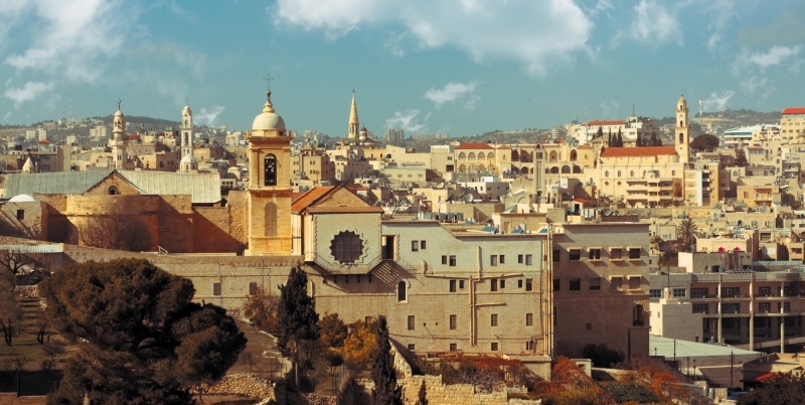 Bethlehem is located at an elevation of about 775 meters (2,543 ft) above sea level, 30 meters (98 ft) higher than nearby Jerusalem.Bethlehem is situated on the southern portion in the Judean Mountains.

The city is located 73 kilometers (45 mi) northeast of Gaza City and the Mediterranean Sea, 75 kilometers (47 mi) west of Amman, Jordan, 59 kilometers (37 mi) southeast of Tel Aviv, Israel and 10 kilometers (6.2 mi) south of Jerusalem.Nearby cities and towns include Beit Safafa and Jerusalem to the north, Beit Jala to the northwest, Husan to the west, al-Khadr and Artas to the southwest, and Beit Sahour to the east. Beit Jala and the latter form an agglomeration with Bethlehem. The Aida and Azza refugee camps are located within the city limits.

In the center of Bethlehem is its old city. The old city consists of eight quarters, laid out in a mosaic style, forming the area around the Manger Square. The quarters include the Christian an-Najajreh, al-Farahiyeh, al-Anatreh, al-Tarajmeh, al-Qawawsa and Hreizat quarters and al-Fawaghreh — the only Muslim quarter.Most of the Christian quarters are named after the Arab Ghassanid clans that settled there.Al-Qawawsa Quarter was formed by Arab Christian emigrants from the nearby town of Tuqu’ in the 18th century. There is also a Syriacquarter outside of the old city, whose inhabitants originate from Midyat and Ma’asarte in Turkey. The total population of the old city is about 5,000.